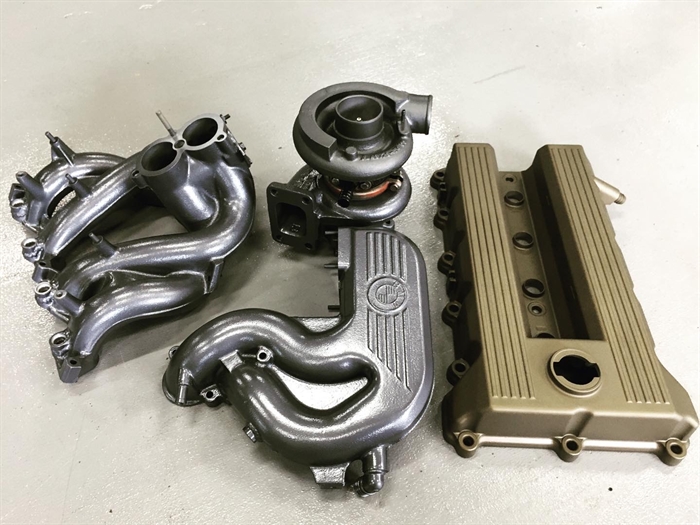 Many 4cyl owners choose to swap their cars with the 6cyl engine because the conversion is essentially drop in when using the correct wiring harness, ecu, and hardware. Its an easy way to boost the performance to essentially M3 level, but my goals are slightly different. I am concerned with balance, and more specifically, keeping the weight as low as possible. The M42 engine is a whopping 90lb lighter than an S52 engine, and this fact alone is why I am choosing to retain the 4cyl configuration for this build.

Naturally, I have decided to tackle the Lack of power drawback of the Ti by adding a turbocharger to the M42 engine. This will allow me to retain a significant portion of the weight advantage from the 4cyl, while pushing the headroom far past what is possible with a naturally aspirated S52. 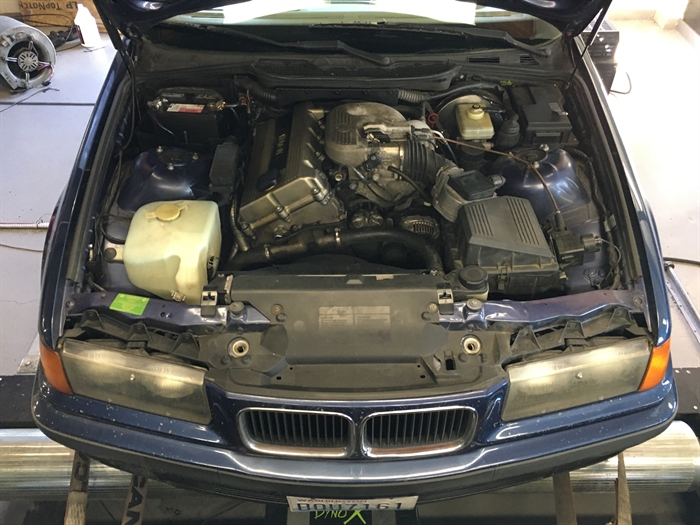 Now, before any of this can happen I need to sort out a few things. The factory engine management system from Bosch is sufficient for its age, but it will be a MAJOR setback when doubling or even tripling the air/fuel flow through this engine. The factory mass air flow sensor is a barn door design, where incoming air must physically hold open the door in order enter the engine. This will create cascading losses in flow energy as more torque is demanded.

The factory fuel system operates with what is known as wasted fuel, meaning the injectors are wired in as pairs and fire together; contrasted to sequential fueling which means each injector is fired independently. Since "wasted fuel" results in slightly worse fuel economy, worse idle quality, and lower peak HP and TQ, I will be modifying the wiring harness to support fully sequential fueling.

There are many factory ECUs that are capable of running a non-standard turbocharged engine with minimal custom wiring, but my factory system is too far from ideal, and I want to have full control over the tuning, performance, and safety of this engine. For this reason, I am using a standalone Microsquirt ecu. Many enthusiasts have seen the plug and play options that Megasquirt offers for a wide range of engines, but unfortunately nothing of the sort exists for the M42. The Microsquirt is the smallest module that the company offers, and is regularly used to run small engines found in ATVs, motorcycles, boats, etc. In this chapter, I will go over how this system can be adapted to run a 4cyl engine with full sequential fuel injection.

Lets begin with the ECU itself. The Microsquirt module consists of 50 main I/O pins, an additional 10 pin array, and two fuel injector drivers. Immediately it's clear that we have a hardware shortage, I need to run 4 independent injectors but there are only 2 outputs on the board itself. Fortunately, DIYAutoTune offers a sequential upgrade board which provides 2 extra injector drivers. 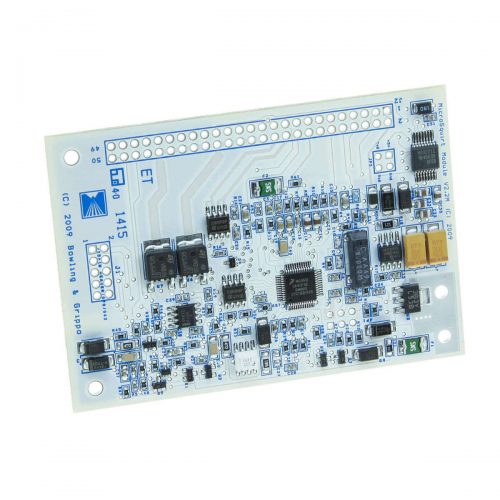 Now of course, this ECU could not possibly survive without some kind of protection, so my course of action is to hide it within the OEM Bosch ECU case. I sourced a dead ecu and began removing its internals. 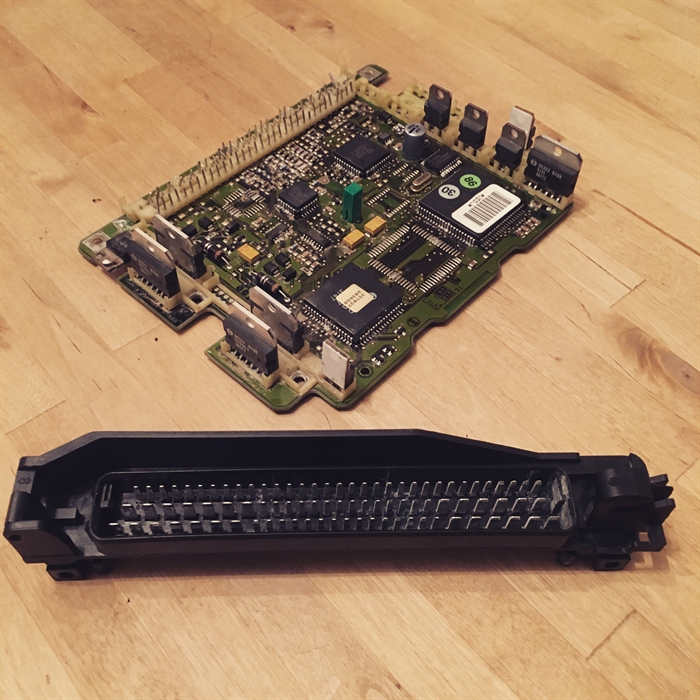 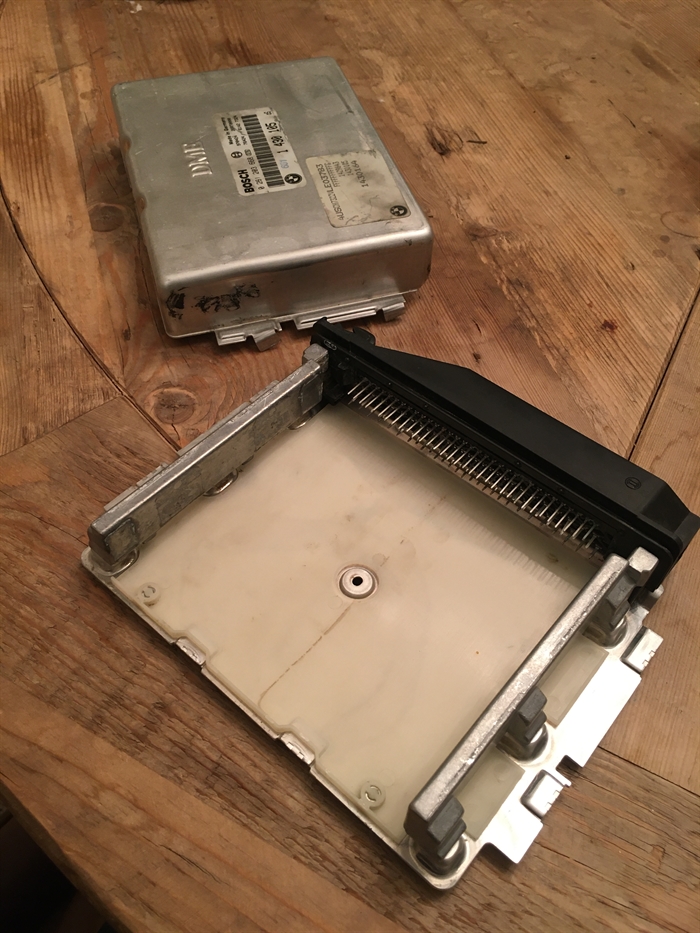 The result is the OEM header for the engine harness completely clipped off, and a stripped shell to mount the Microsquirt within! This harness connector is the core component to the entire system, allowing essentially a plug and play connection between the standalone ECU, and the engine's electrical components/sensors. In order to accomplish this, I created a wiring diagram to interface between the OEM BMW wiring, and the necessary wiring for the Microsquirt to operate The complete electrical troubleshooting manual for the 1995 318ti and many other BMWs can be found online, and was a critical resource during the development of this diagram.â€š 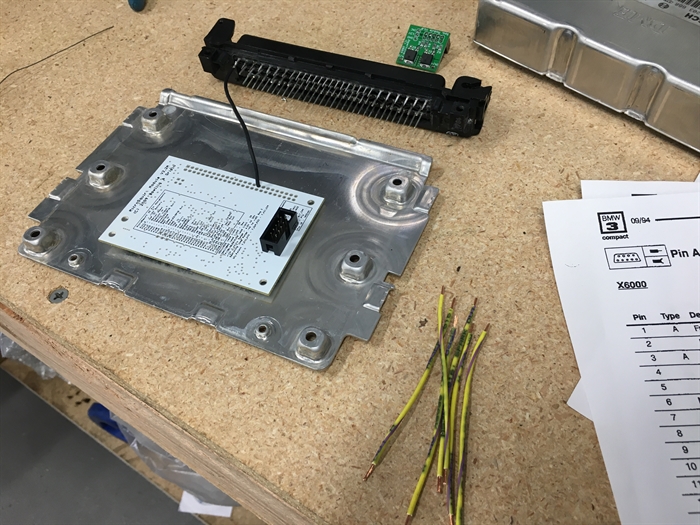 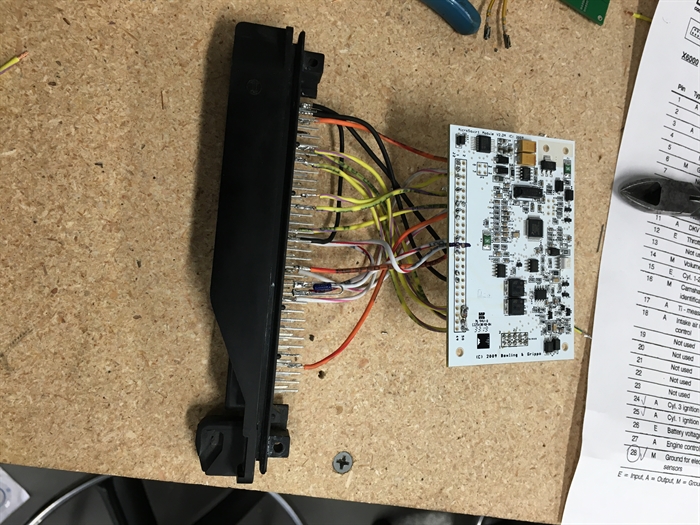 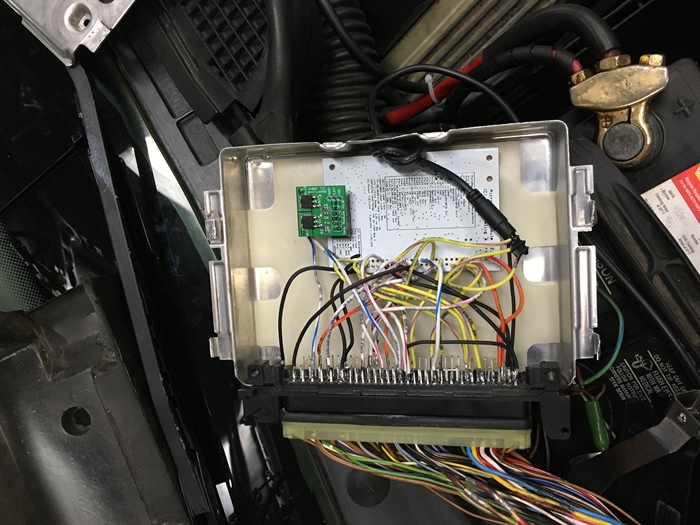 I will need the ability to collect data and tune this car, so I wired in a set of AEM gauges for AFR (air fuel mass ratio) and MAP (manifold absolute pressure). I chose to make my own dual gauge panel using an OEM e36 LTW radio panel and a hole saw. After going to town on my interior, I am fairly pleased with the results! 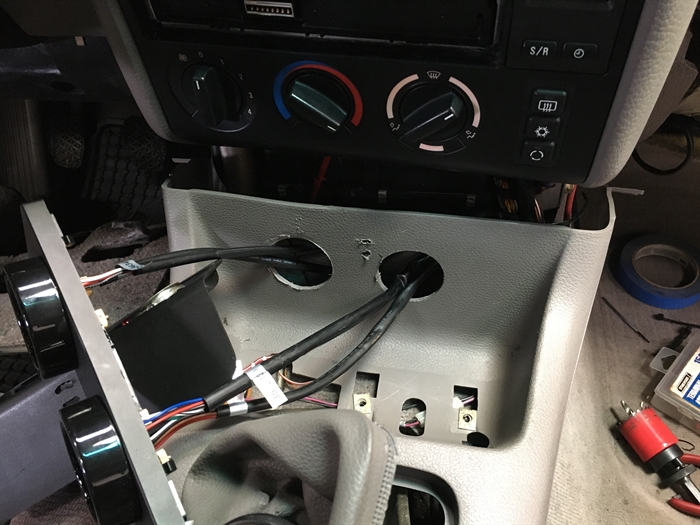 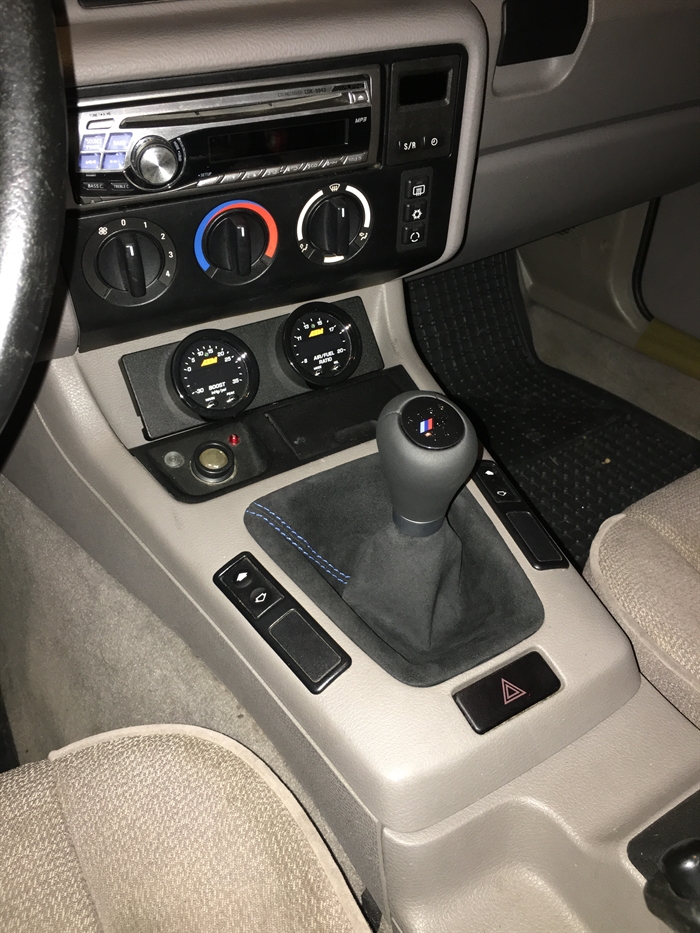 The factory fueling system uses what are known as "air shrouded" injectors, where airflow is directed through the injector itself during operation for better theoretical atomization and fuel efficiency. In this case, I am replacing this ancient technology with a set of Seimens Deka 60lb/hr injectors, nearly tripling the fueling capacity! The injectors for the E36 M42 have a unique sized tip and o-ring, which means that the new injectors do not fit directly into the intake manifold. To correct this, I welded on a set of injector bungs with the correct inner diameter, allowing me to retain the factory fuel rail and electrical connections. 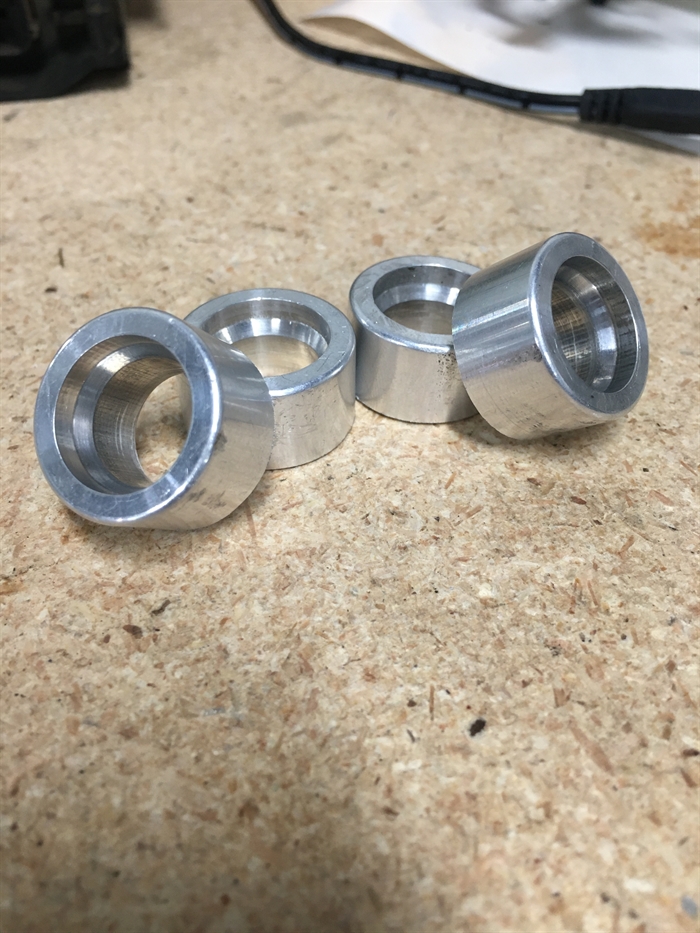 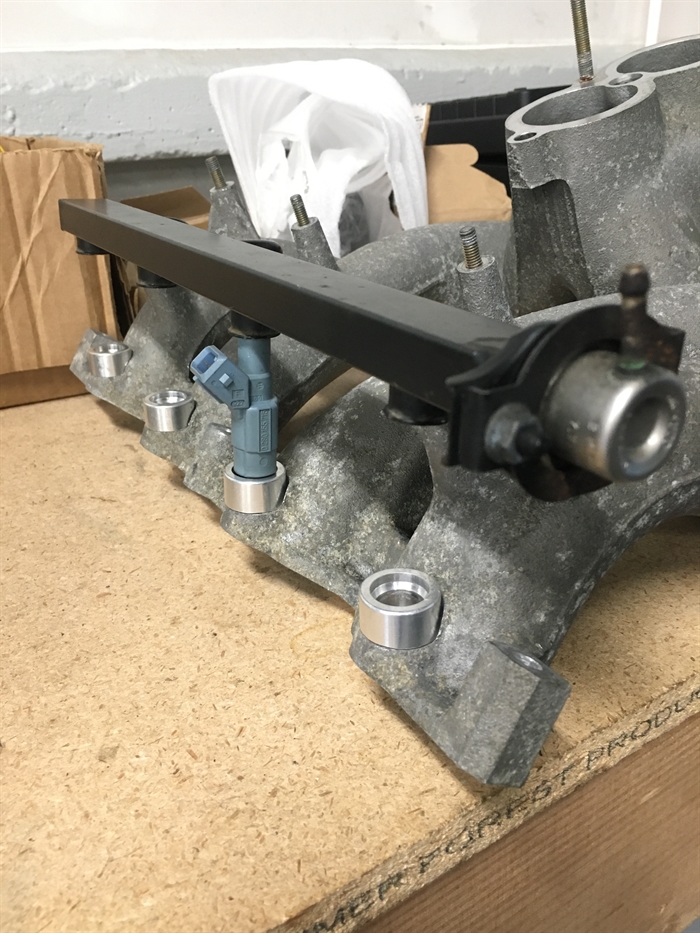 Finally, I tossed the original ignition system out the door in favor of a set of Audi R8 coil packs. These coils receive a low current signal from the ECU and draw power from a dedicated source. This significantly lightens the load on the ECU's power supply, and the R8 coils are known for their reliability when running at high ignition loads (Forced Induction). 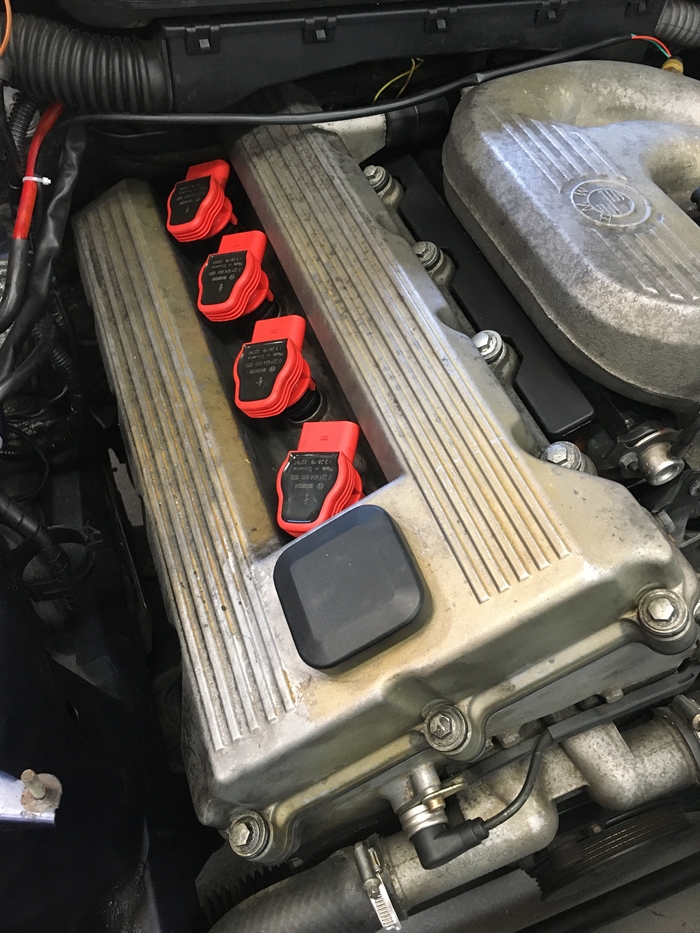 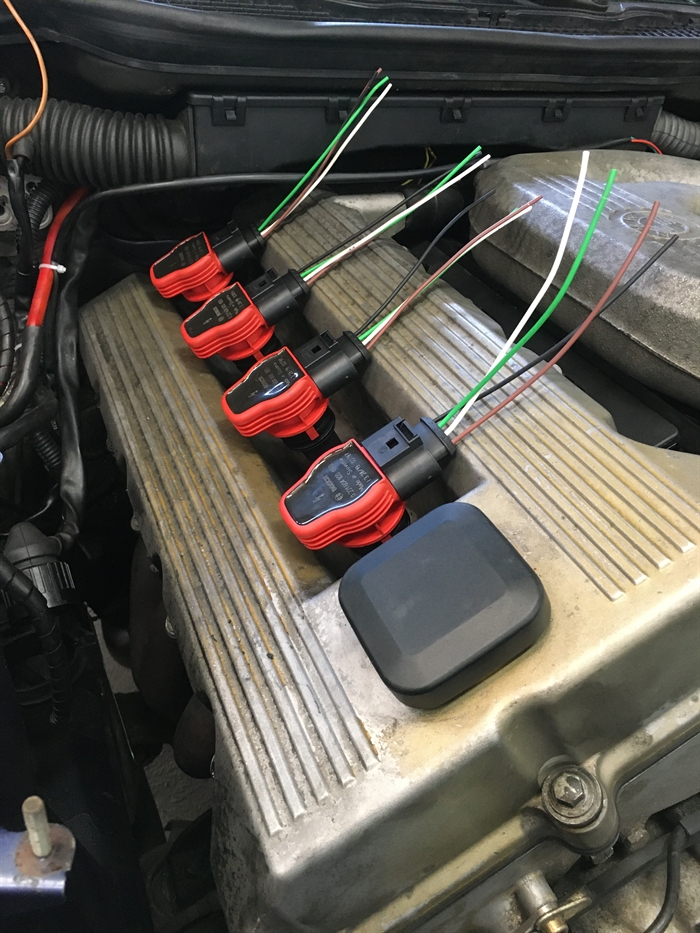 Now, here is the finished product after cleaning up the wiring a bit, and ceramic coating the valve cover and intake manifold. :) 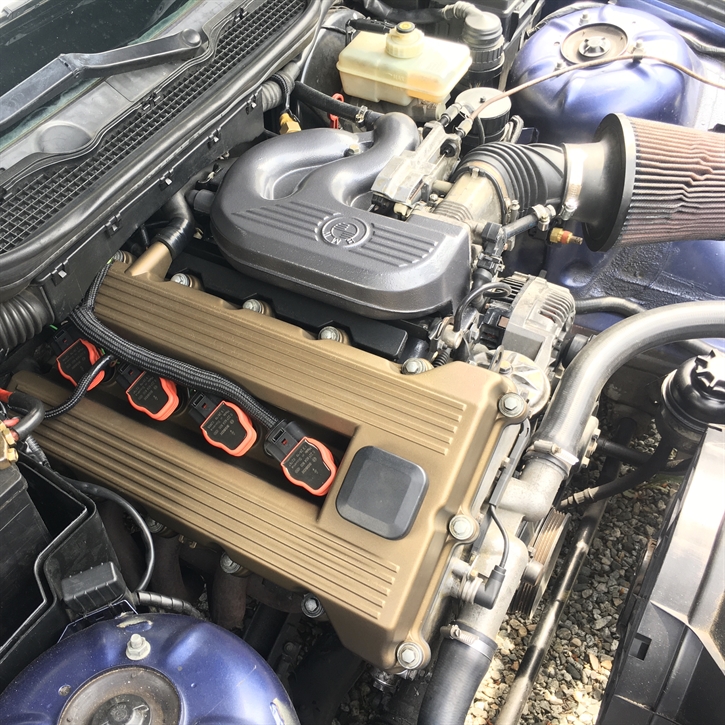 After a bit of dyno tuning, these are the results on a completely stock 197k mile engine running with the Microsquirt. The peak horsepower gains are very mild, now peaking at 136whp, but the torque has been improved at both the low and high RPM range resulting in much smoother power delivery. 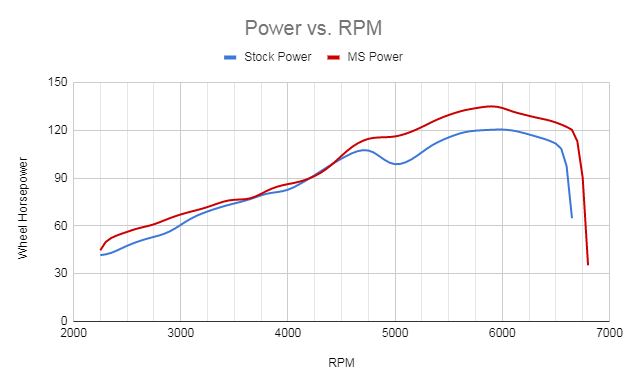 Next comes the truly fun part of this type of build, stay tuned!

All internationally shipped products are shipped VIA USPS only. We have no control of the processing times of customs. This can take weeks. If your product fails to pass customs due to an error in your shipping information you will be liable for all additional shipping charges that may be incurred to reship your item.

If you pay via Paypal please double check all of your shipping information. We are required to ship to whatever information is in here as part of paypal's policies. We cannot change this address after payment.

If you do not agree to all of the terms above, please do not place your order or consider seeking a forwarding company.

We won't spam you or sell your email address

Select Vehicle From My Garage